What Purpose Does the American Bar Association Serve? 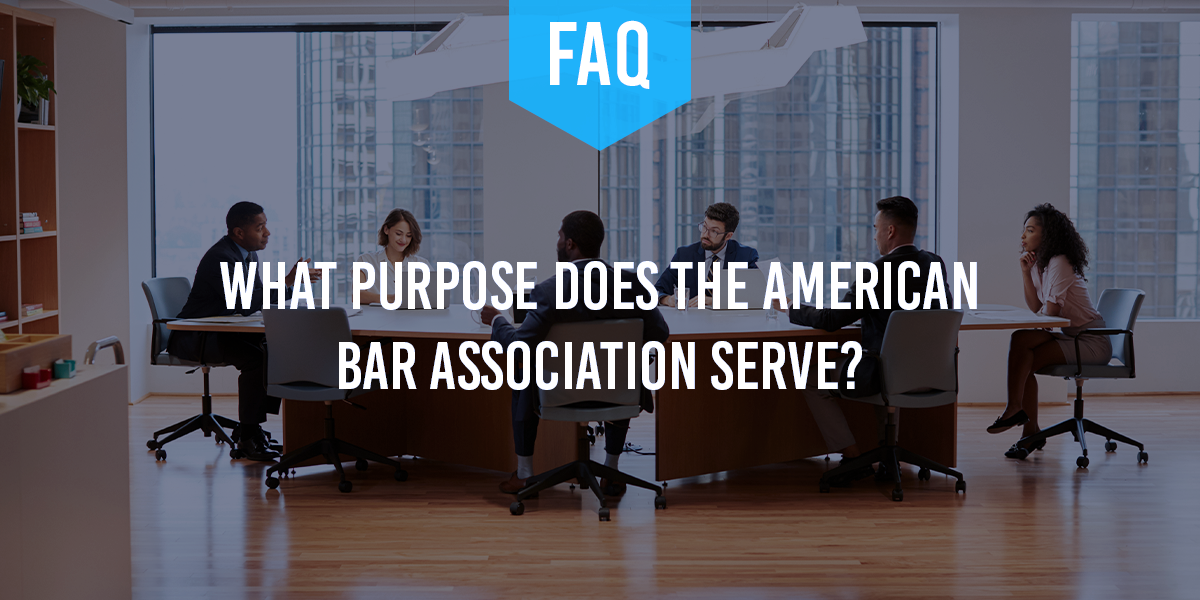 Many of us have heard of the American Bar Association (ABA) and have probably wondered what purpose this institution serves. The ABA is the largest organization of American lawyers & law students and the world’s largest voluntary association, with over 350,000 members and comprised of more than 3500 entities. Founded in 1878, ABA is dedicated to promoting the rule of law across the U.S and beyond by setting ethical codes and supporting legal professionals, institutions, communities, and more.

Here’s a brief summary of the history of the ABA and its mission and purpose.

The History of the American Bar Association

The ABA was founded by 75 lawyers from 21 states on August 21, 1878, in Saratoga Springs, New York. Before the ABA, there was no national code of ethics or organization to serve as a platform where legal professionals could discuss work-related concerns and issues related to the legal practice.

According to historians, lawyers played a pivotal role in the creation of the United States of America. Although most of the members at the Constitutional Convention in 1787 were lawyers, along with the many presidents, leading government figures of the United States, in the early and mid-1800s, there was a prevailing attitude against lawyers. They complained that anyone could become a doctor or lawyer without proper training or education. Those dominating anti-lawyers sentiments began changing after the Civil War when New York’s lawyers founded a city bar association in 1870. Following the example of New York’s attorneys, state associations were formed in Kentucky in 1871, New Hampshire in 1873, Iowa in 1874, Connecticut in 1875, and Illinois in 1877, etc.

The purpose of the original association, as outlined in its earliest constitution, was “the advancement of the science of jurisprudence, the promotion of the administration of justice and uniformity of legislation throughout the country.”

The Purpose of the American Bar Association

The ABA is a private organization with no official status but is vital in formulating guidelines for the best practice of law, advocating justice in the implementation of the law, giving direction to legislation and ethics, promoting the law profession, and vetting federal judges. Moreover, the ABA provides practical resources for legal professionals, promotes the highest quality of legal education and facilitates the exchange of ideas and information among its members.

Over the years, ABA has been mainly responsible for keeping governments accountable under the law and enhancing public understanding and respect for the rule of law. The ABA created the American Law Institute (ALI) and the Conference of Commissioners on Uniform State Laws that encourage uniformity of statutes and judicial decisions to support the fair administration of justice.

In conclusion, the main purpose of the American Bar Association is to be the national representative of the legal profession, to enhance the administration of justice, and to ensure the availability of legal services to all people. In other words, the association aims to serve the public and the legal profession’s interests by advancing justice, professional improvement, and respect for the law as well as eliminating bias and enhancing diversity.

Artificial Intelligence and Its Impact on the Legal Sector