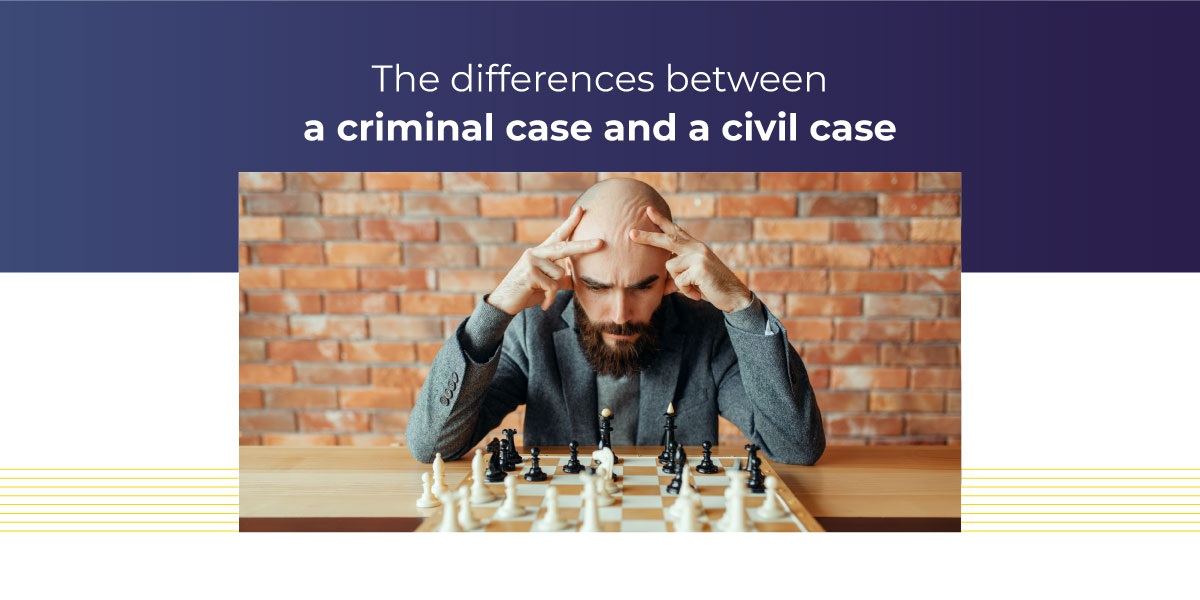 Criminal cases and civil cases: they are very different. Civil cases usually involve private disputes between people or organizations. On the other hand, a criminal case involves an action that considers being harmful to society as a whole. Also, criminal cases are filed by the government: local city, state, or federal. Before we start comparing the two, let’s understand one very important thing. The same conduct can produce a civil and criminal liability. Yes, the criminal and civil cases are treated differently. That is why people usually fail to recognize that the same conduct can result in both criminal and civil liability.

To better understand, let’s go over an example. Have you heard about the OJ Simpson trial? The same conduct led to a murder trial, which is a criminal case, and a wrongful death trial, which is a civil trial. Because of different standards of proof, there was not enough evidence for a jury to decide that OJ Simpson was guilty “beyond a reasonable doubt” in the criminal murder case. Furthermore, in the civil trial, the jury found enough evidence to conclude that OJ Simpson wrongfully caused his wife’s death by a “preponderance of the evidence”.

Moving forward, let’s go over the two types of cases and understand their differences.

Here is how civil cases begin: a person or entity, a corporation or the government, called the plaintiff, claims that another person or entity, the defendant has failed to carry out a legal duty owed to the plaintiff. Legal duties include respecting rights established under the Constitution or under federal or state law. Moreover, the plaintiff may ask the court to tell the defendant to fulfill the duty. Or the plaintiff may ask the court to make compensation for the harm done. And sometimes, both can be asked. Furthermore, civil suits are brought in both state and federal courts.

A person accused of a crime is generally charged in a formal accusation called an indictment, for felonies or serious crimes, or information, for misdemeanors. Therefore, the government, on behalf of the people of the United States, prosecutes the case through the United States Attorney’s Office if the person is charged with a federal crime. Moreover, a state’s attorney’s office prosecutes state crimes.

It is important to note that it is not the victim’s responsibility to bring a criminal case. For example, in case of kidnapping, the government would prosecute the kidnapper. The victim would not be a part of the action. And in some cases, there is no specific victim. There is a really good example. Imagine the state governments arresting people for violating laws against driving while intoxicated. The police arrest them because society regards that as a serious offense that can result in harm to others. But even if no one was harmed, the person violating the law still gets arrested. And there are possible outcomes for a DUI case that might affect the person violating the law. Also, it is important to note that speeding tickets are also criminal in nature.

When a court determines that an individual committed a crime, that person will receive a sentence. The sentence may be an order to pay a monetary penalty. For example, it could be a fine and/or restitution to the victim. In other cases, the sentence may be imprisonment, supervision in the community or some combination of these three things.

Differences Between a Criminal Case and a Civil Case

First of all, crimes are offenses against the state, or society as a whole: even though one person might murder another person, the murder itself is an offense to everyone in society. Accordingly, crimes against the state are prosecuted by the state, and the prosecutor, not the victim, files the case in court as a representative of the state.

Second, the two cases are different in terms of their punishment. Moreover, criminal cases usually will have jail time as a potential punishment. And in some cases that would not be all: monetary punishments in terms of fines might be present, too. However, civil cases generally only result in monetary damages or orders to do or not do something.

The third difference is regarding the standard of proof. Crimes must generally be proved “beyond a reasonable doubt.” However, civil cases are proved by lower standards of proof such as “the preponderance of the evidence.” It means that it was more likely than not that something occurred in a certain way.

Fourth, most of the time criminal cases allow for a trial by jury. It is not the same with civil cases: they allow juries in some instances. But in many civil cases, the judge will have a say.

Criminal cases and civil cases are wildly different. Criminal cases have greater consequences. For example, there is the possibility of jail and even death. And at the same time, there are more protections for defendants. But the thing is that they are harder to prove. Keep in mind that if you are facing either a criminal or even a civil case, you need to find yourself an experienced lawyer. Only that way you can make sure to protect your rights.

AppearMe for Consumers: Hire a Criminal Lawyer or a Civil Lawyer to handle your legal matters

AppearMe for consumers is a reliable and easy-to-use platform that enables you to find the right lawyer for your legal issue by practice area. Visit our website, submit a request, receive proposals from experienced lawyers of our nationwide network, choose your lawyer to help you address your legal issues.

In case you have questions, please don’t hesitate to call us at (888) 900-3080  or send an email to [email protected]. Our 24/7 customer support service would love to answer all your questions and provide support if needed.

What are the Legal Consequences of Driving Under the Influence?

7 Sure Signs you Need to Hire a Child Custody Lawyer